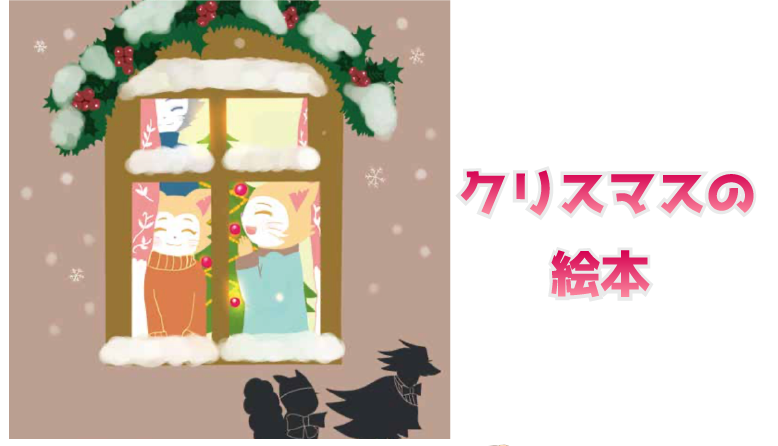 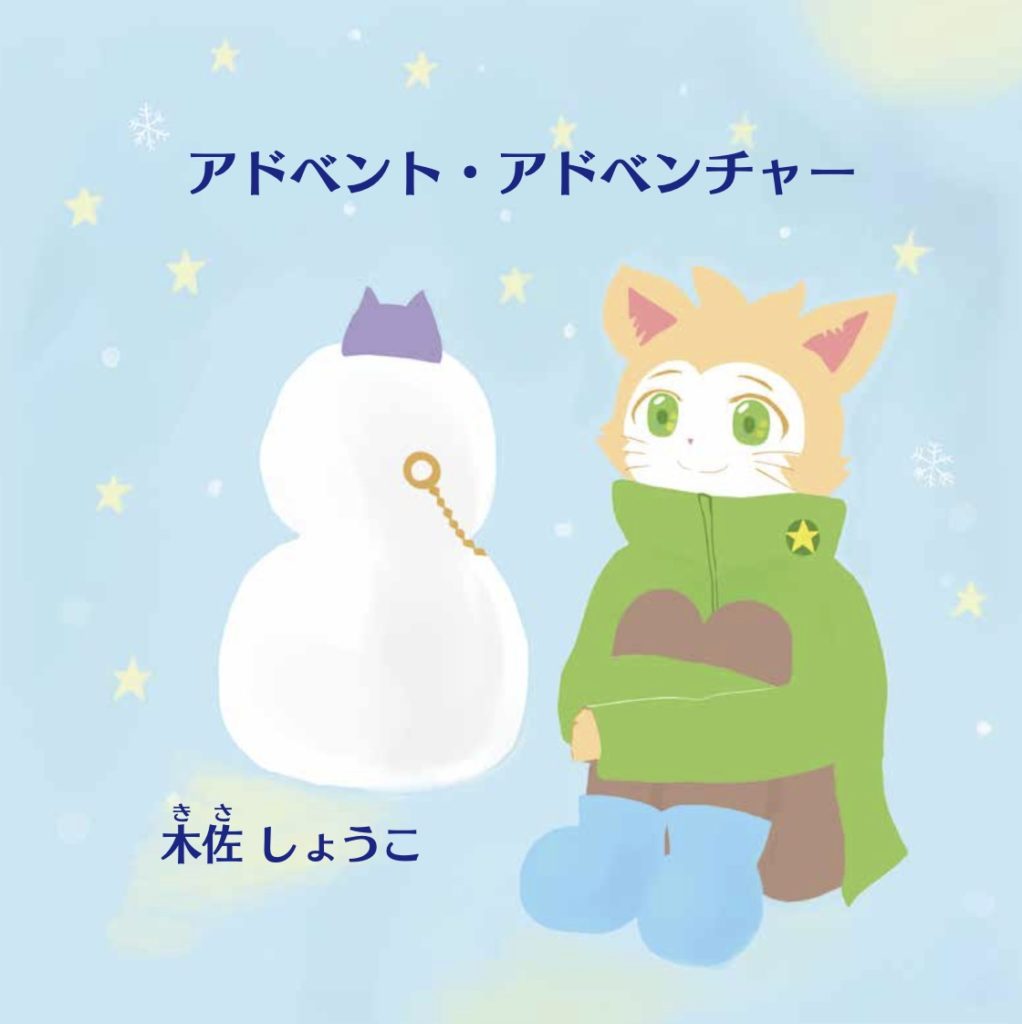 The air was frosty,
but everyone’s hearts were warming up, it was definitely Christmas Eve! 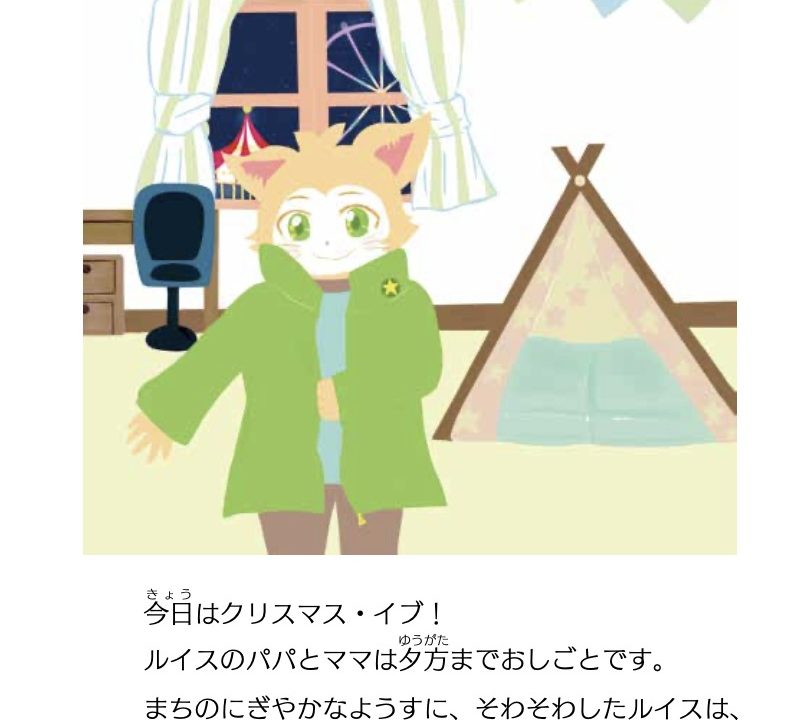 Louis’ mom and dad were working into the evening that night. The town was very lively,
and Louis was excited to go out to Winter Wonderland. 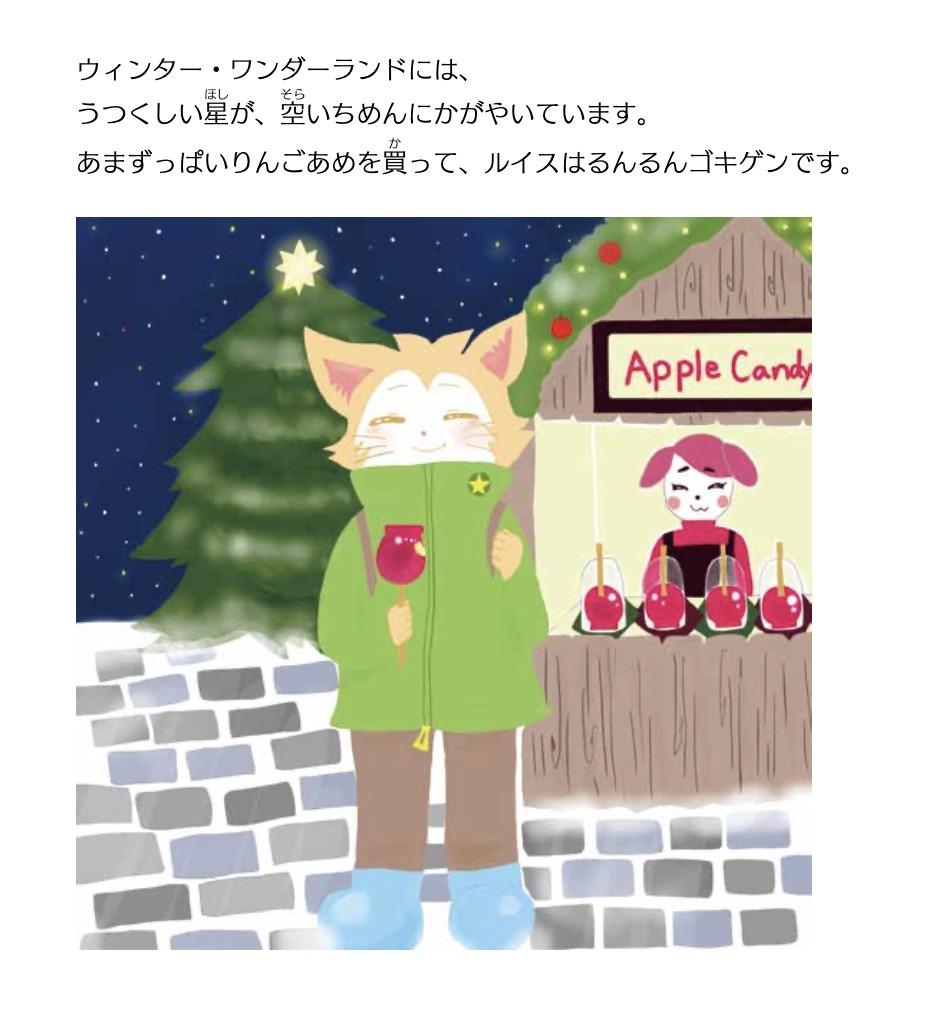 Beautiful stars lit up the sky over Winter Wonderland.

Louis bought an apple candy when he arrived. It tasted both sweet and sour,

and he felt very happy. 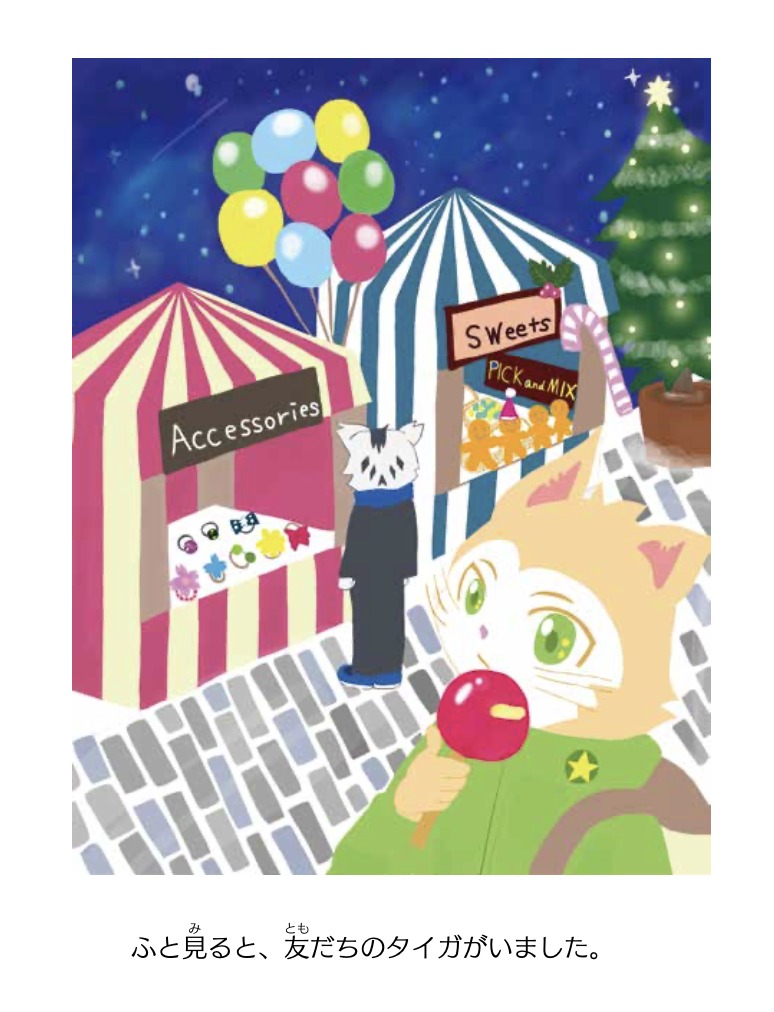 He looked around and suddenly spotted one of his friends, Taiga. 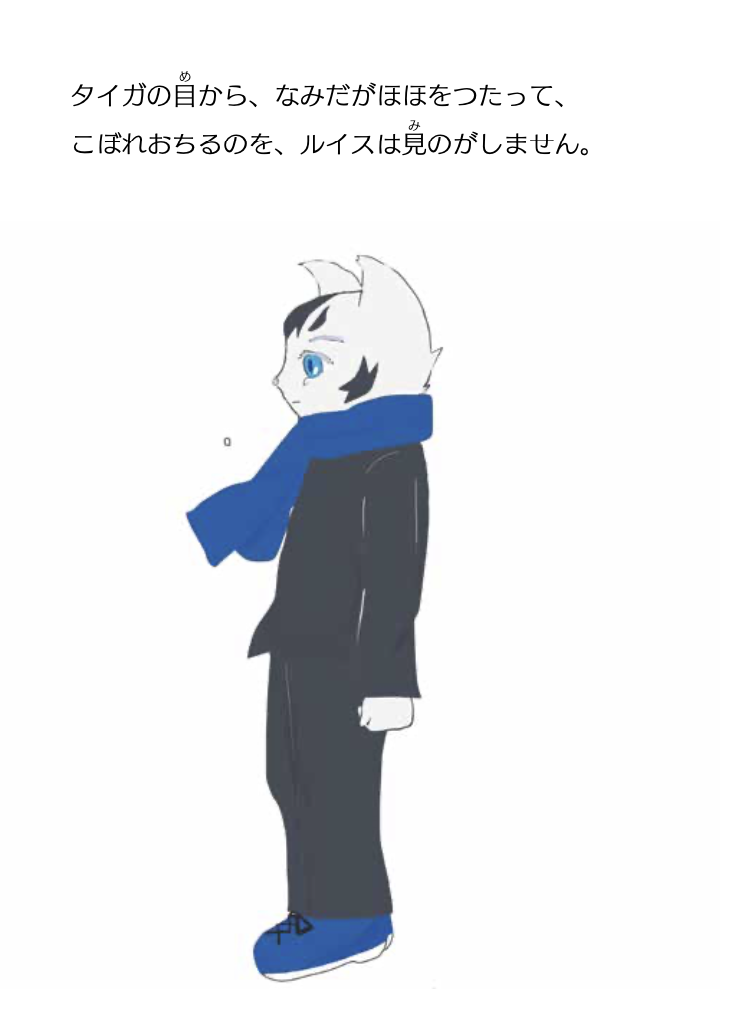 When Louis went to talk to Taiga though,
he realized tears were streaming down Taiga’s face. 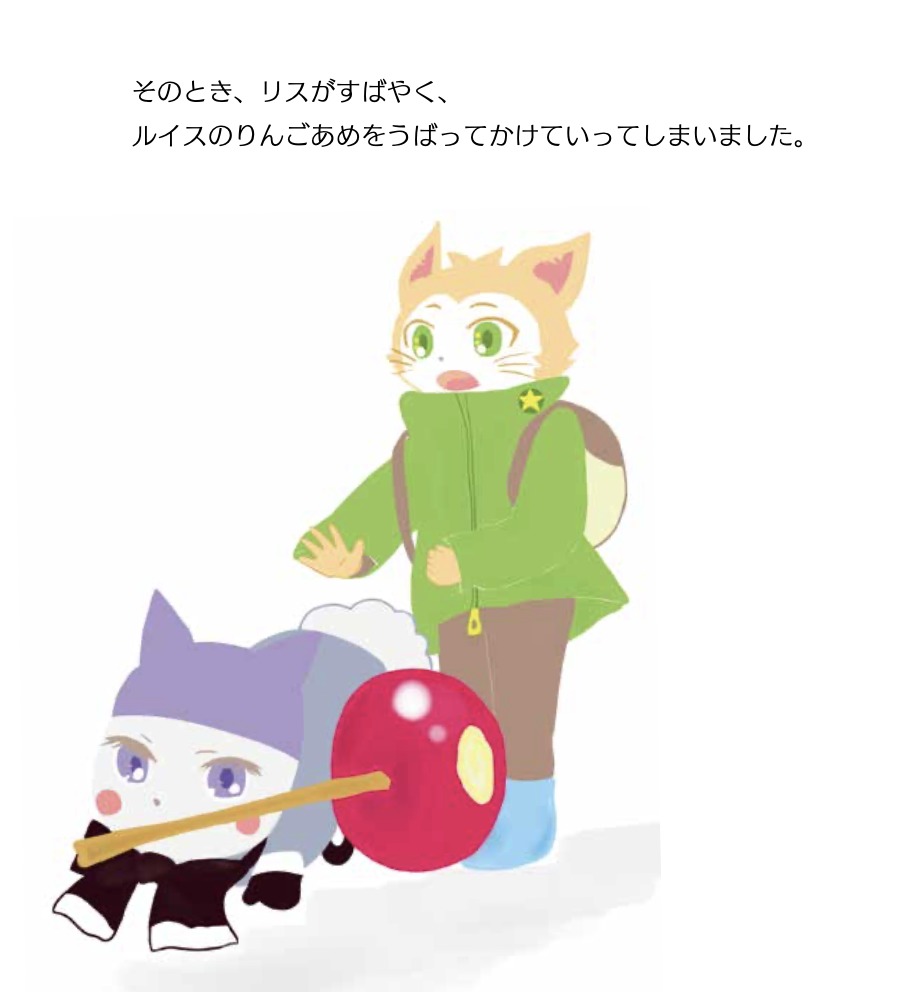 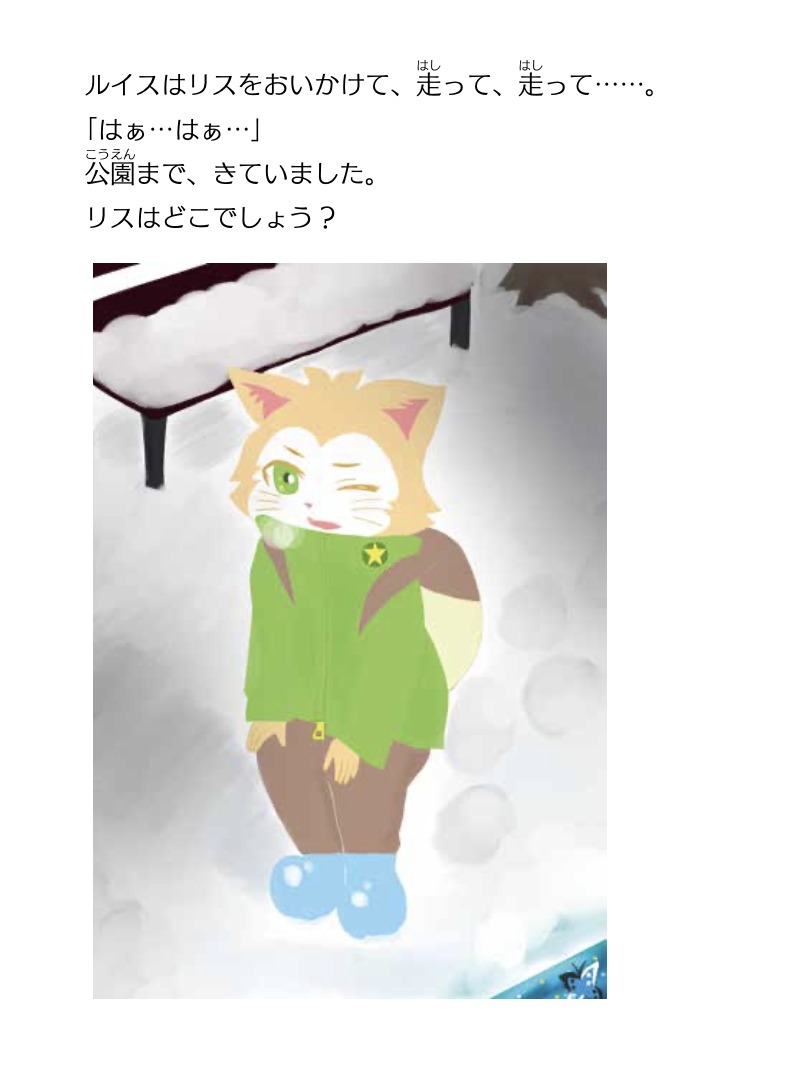 He ran and ran and ran, and ended up at the park. “Phew!”, he huffed and puffed.
Where could that squirrel be? 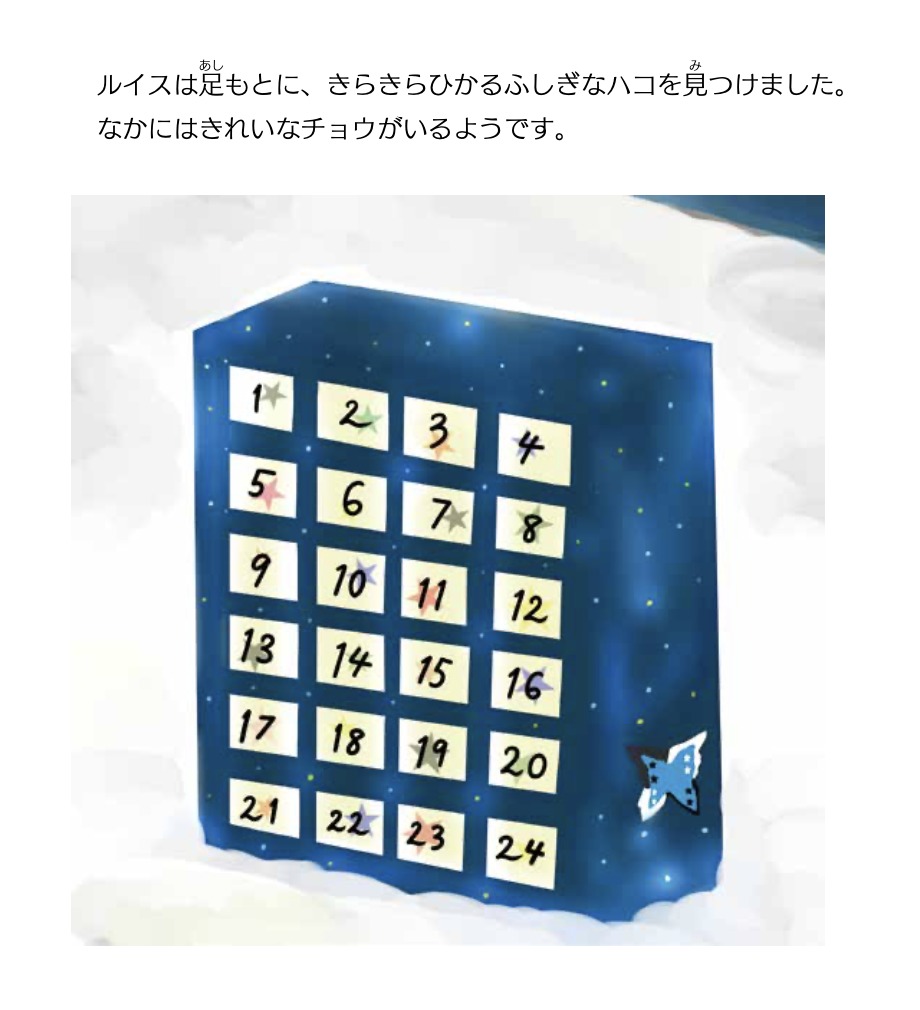 Just then, Louis found a box that was glittering strangely at his feet. Inside the box, there seemed to be a beautiful butterfly. 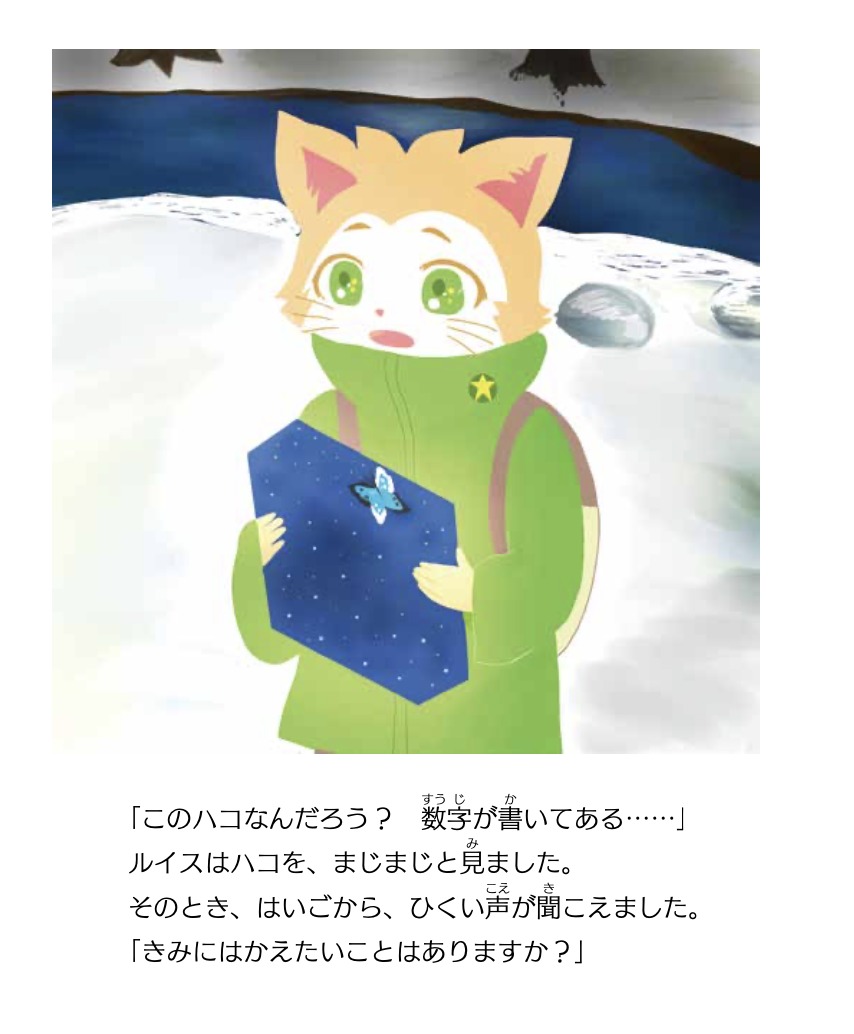 “What is this box? There are numbers written here…” Louis stared hard at the box.

“Isn’t there anything you’d like to change?”
Louis heard a low voice coming from behind him. 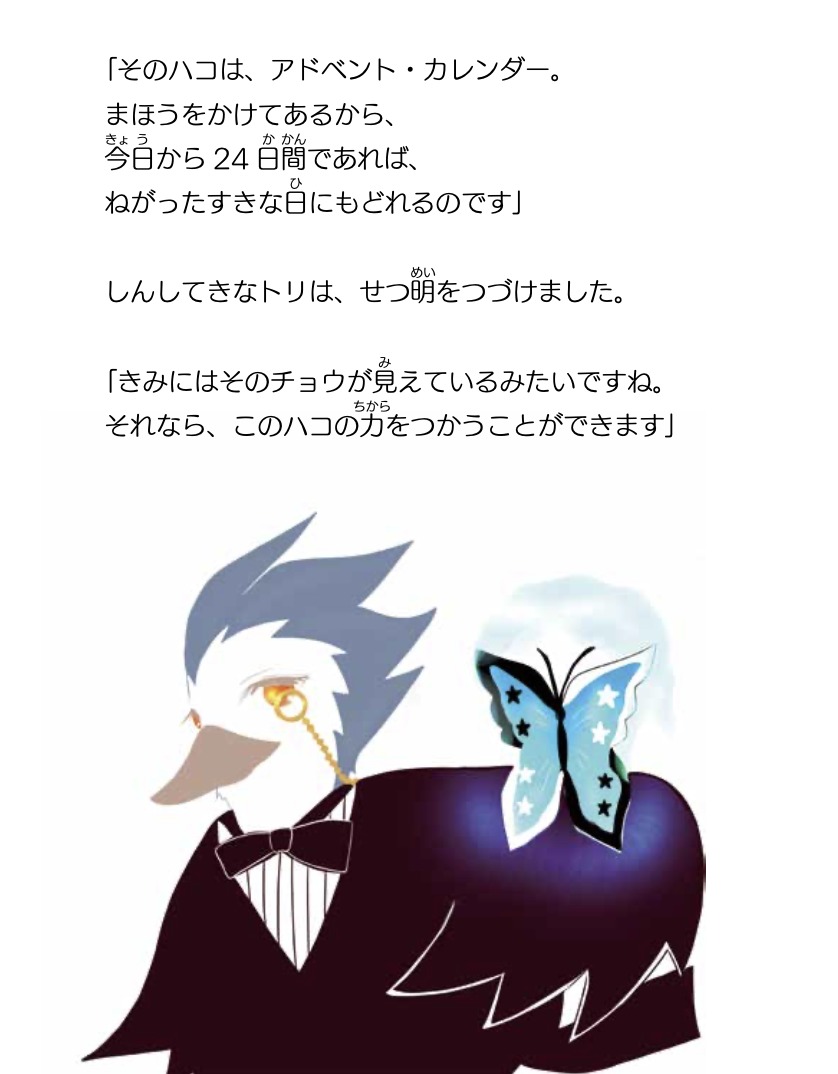 There was a bird he had never seen before, and a squirrel.

“You seem to be able to see the butterfly, then. That means you can use the power of the box.” 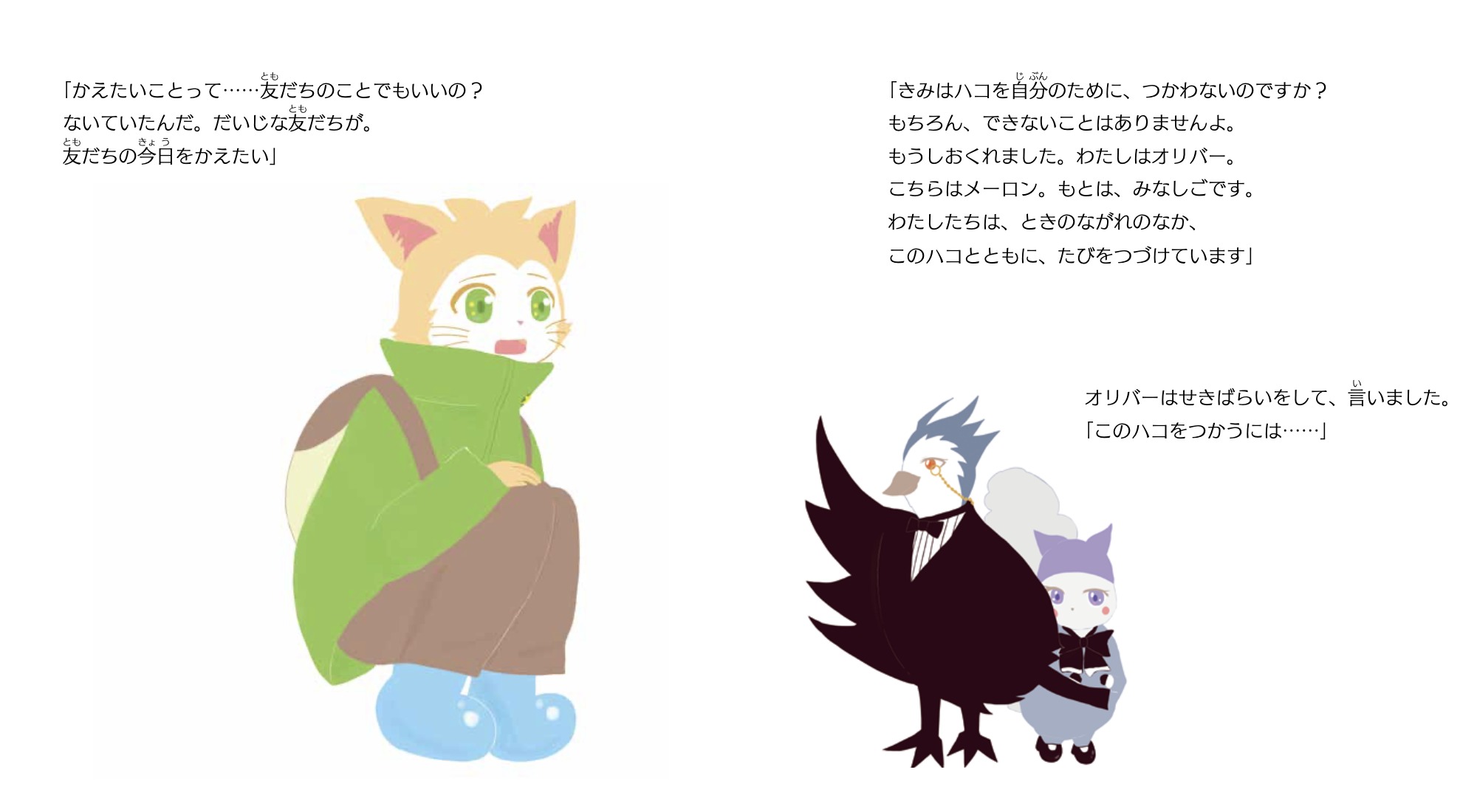 The bird continued gently. “It is an advent calendar.

“Could I use this box to change my friend’s today?

I saw my best friend crying a little while ago.

I don’t want him to be crying today.”

“You’re not going to use the box for your own benefit...? Oh, I haven’t even introduced myself.
My name is Oliver.
This is Melon, we travel together with this box, through the stream of time.” 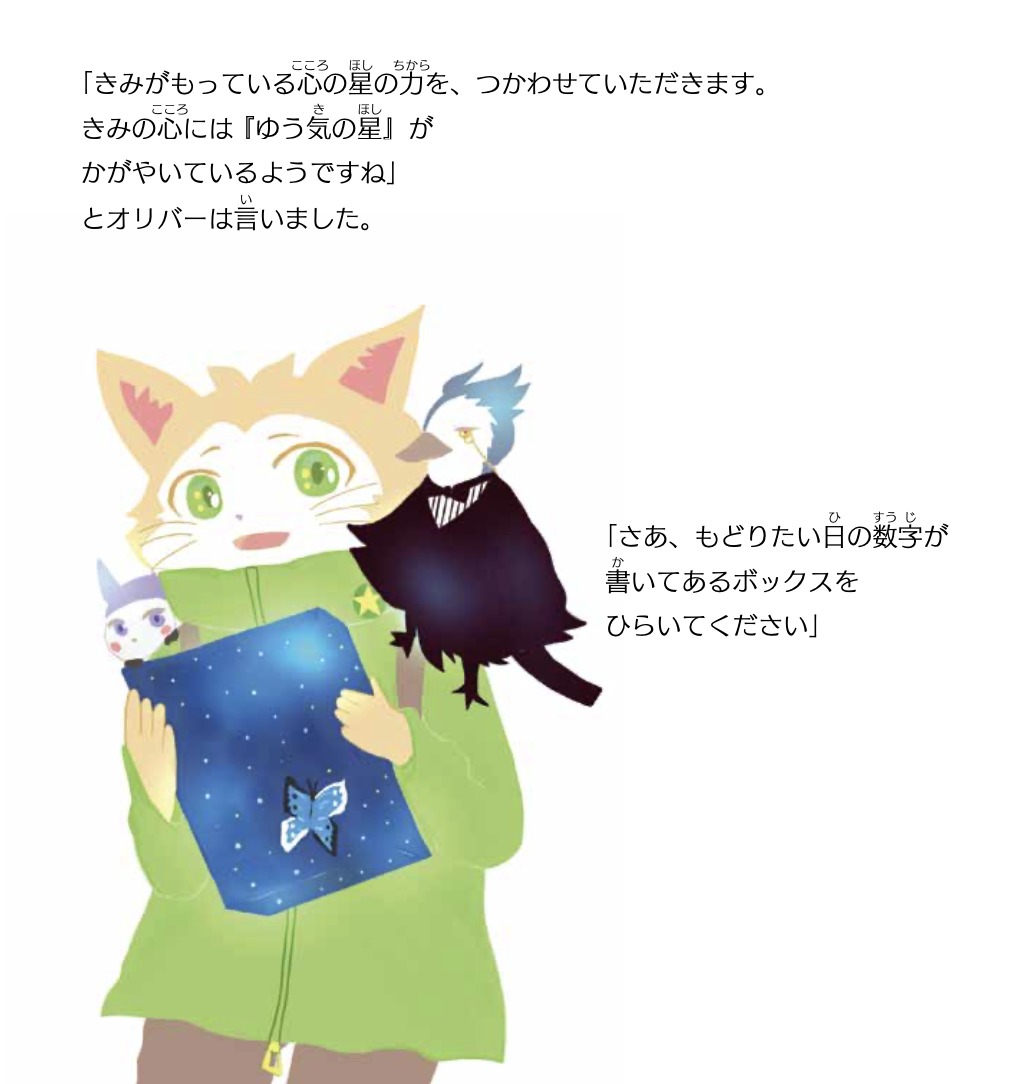 Oliver cleared his throat and said “There is a condition for using this box, however.”

“This box is powered by the star in your heart. You have a star of the brave,” said Oliver.

“Now, open the number of the day you wish to go back to.” 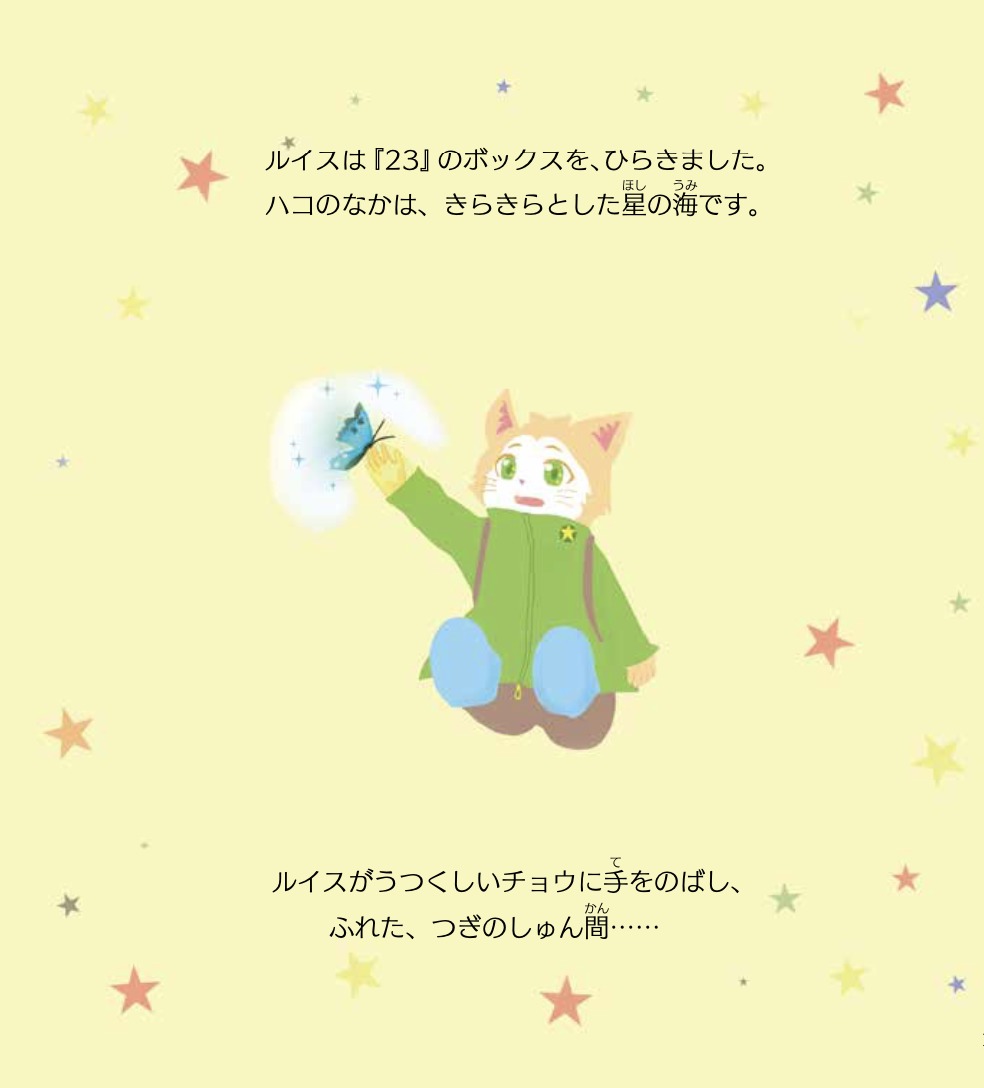 Louis opened the box numbered 23. In the box, there was a starry sea. 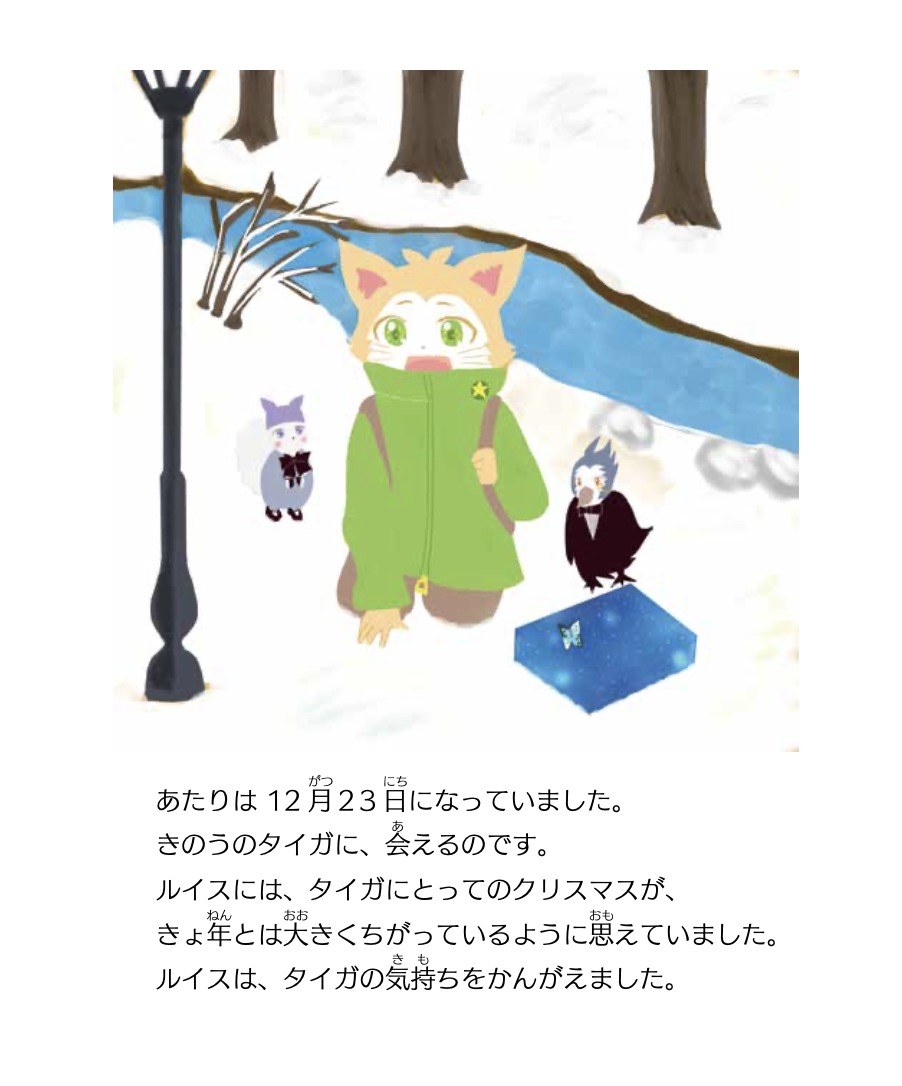 It was December 23rd…
They would be able to meet up with yesterday’s Taiga. Louis realized that Christmas this year would be different for Taiga.
Louis thought about Taiga’s feelings. 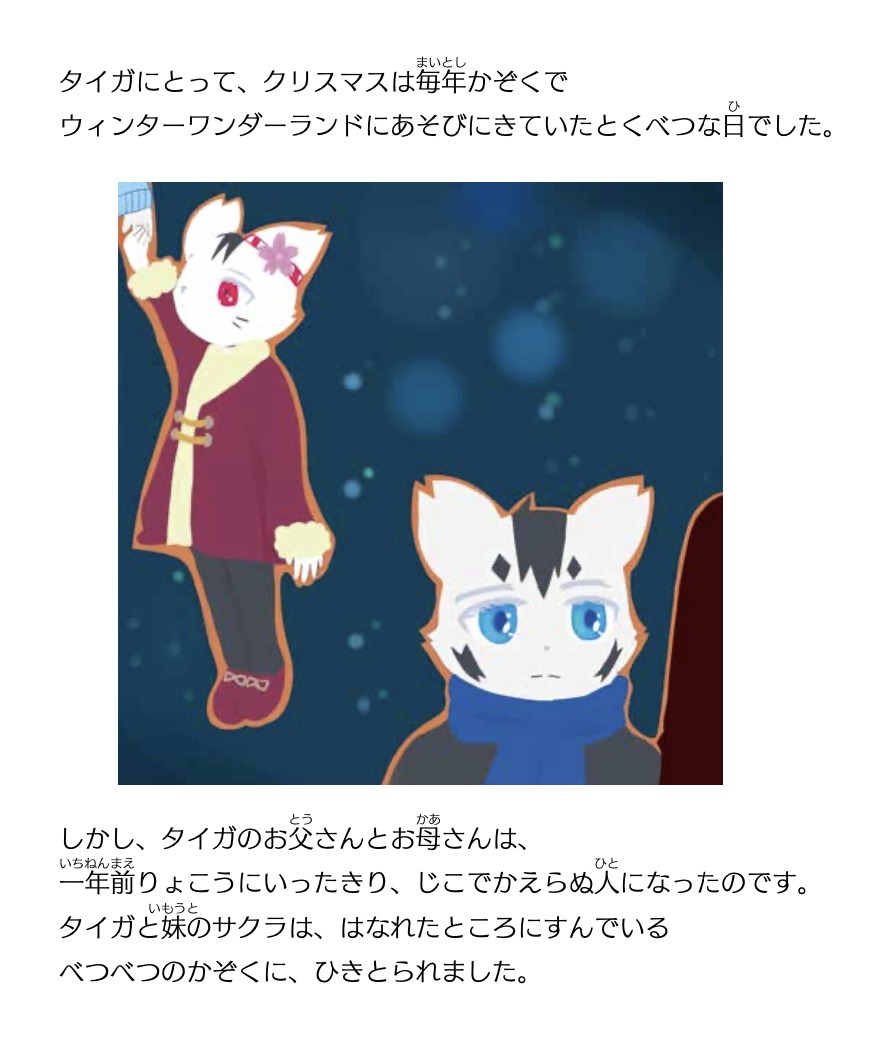 To Taiga, Christmas was the special day when he and his family went to Winer Wonderland every year.

Louis imagined that Taiga had hesitated to tell his step family how he felt.
Oliver whispered to Louis. 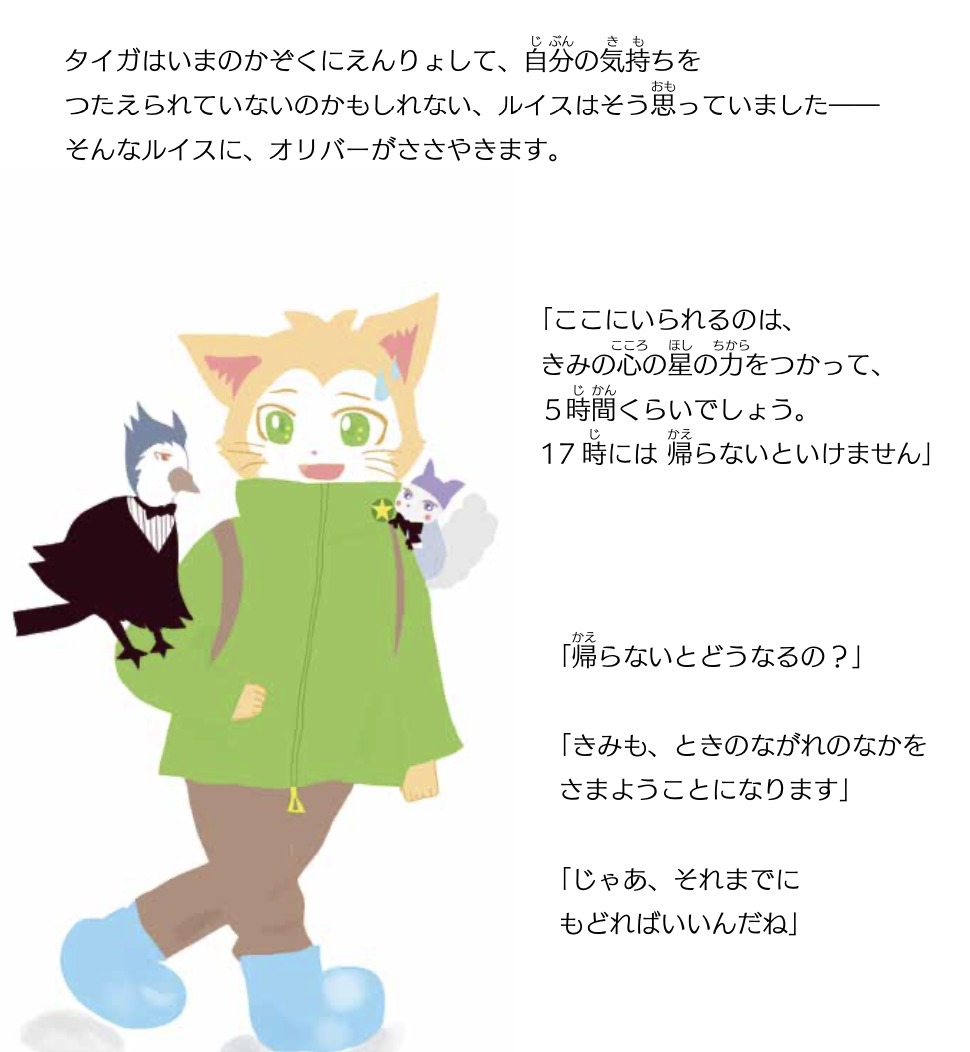 “Using the power of your star, we can stay here for 5 hours.

We have to be back by 5PM.” said Oliver calmly.

“You will wander the stream of time eternally too.”

“As long as we’re back by 5, then everything will be alright.” 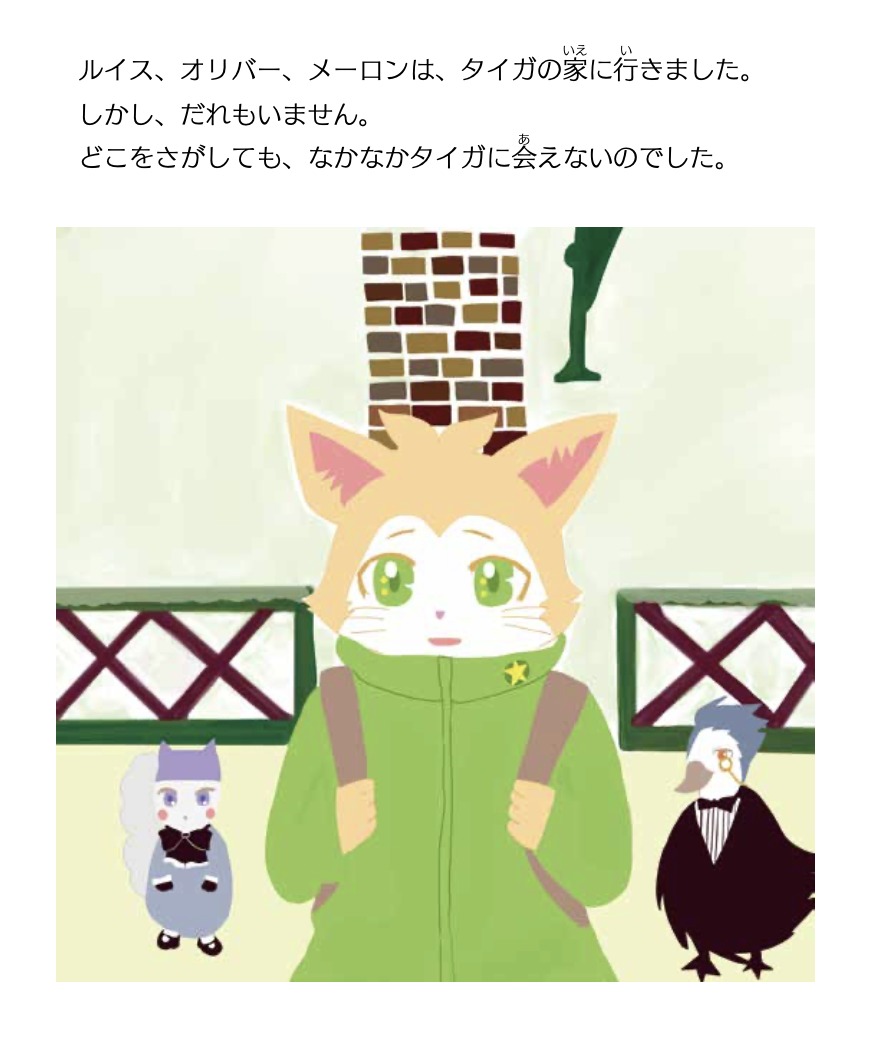 Louis, Oliver and Melon went to Taiga’s house…
…but no one was there.
They couldn’t find Taiga no matter where they looked. 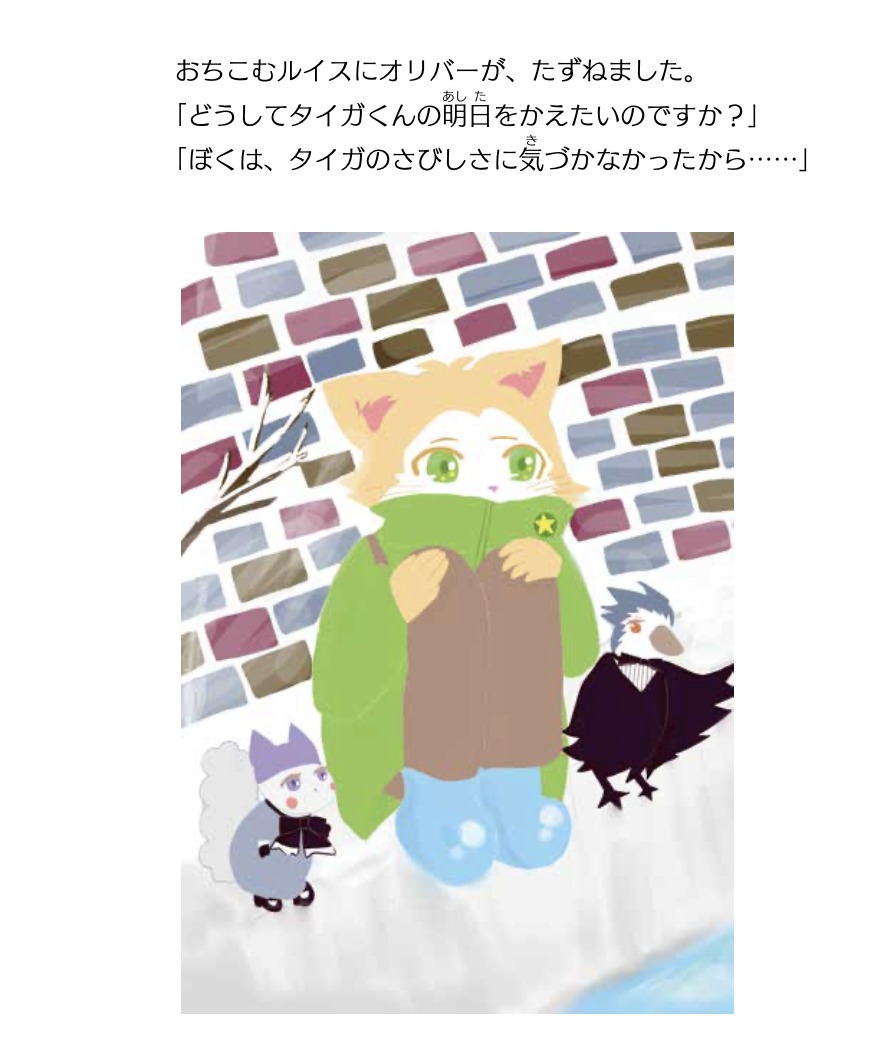 Oliver asked the downhearted Louis,
“Why do you want to change Taiga’s tomorrow?” “I didn’t notice Taiga was lonely.” 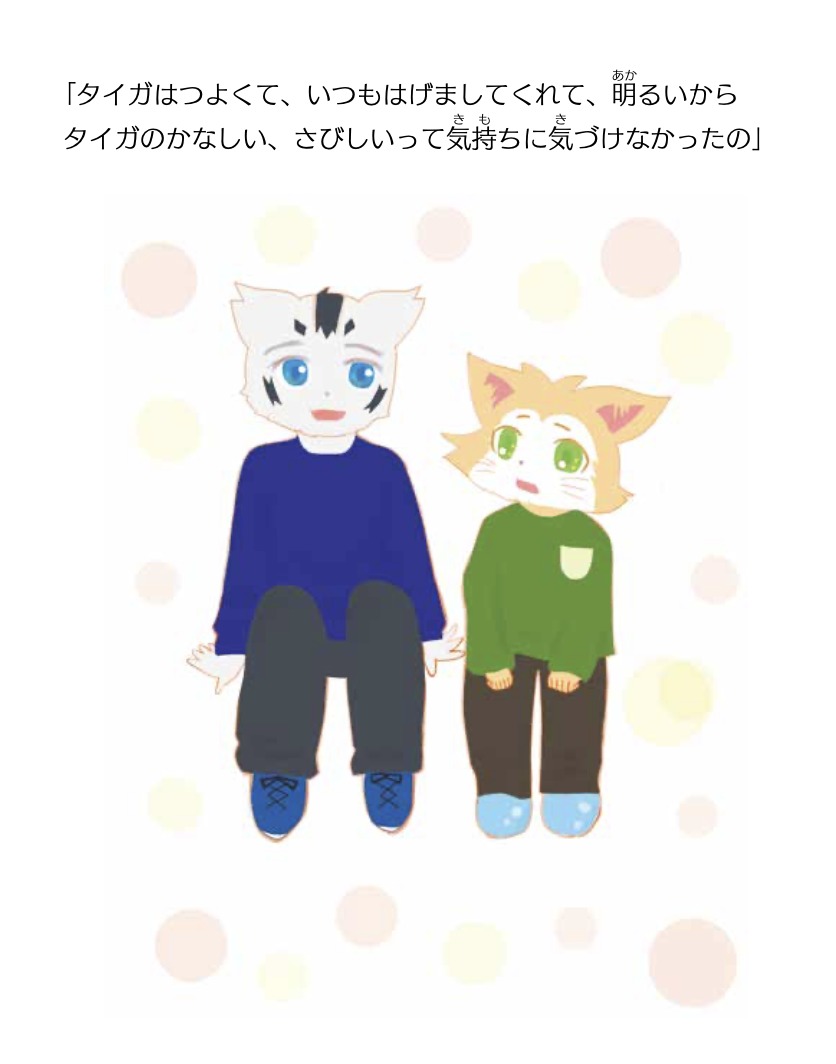 “I didn’t notice that Taiga was sad or lonely, because he seemed strong and bright.
He could always cheer me up.” 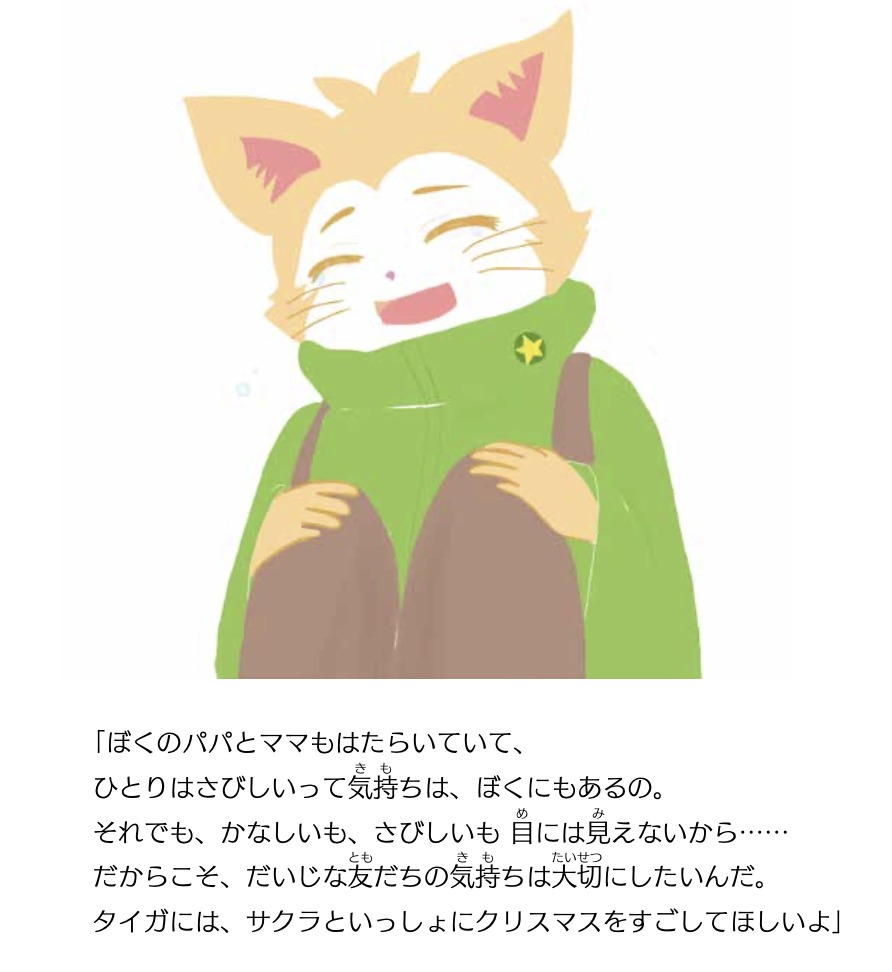 “When my mom and dad are working, I feel lonely too. It’s difficult to notice sadness or loneliness because we can’t see what’s inside people’s hearts.
That’s why I want to guess, my friend’s feelings are so important to me.

I want Taiga to spend Christmas with Sakura.” 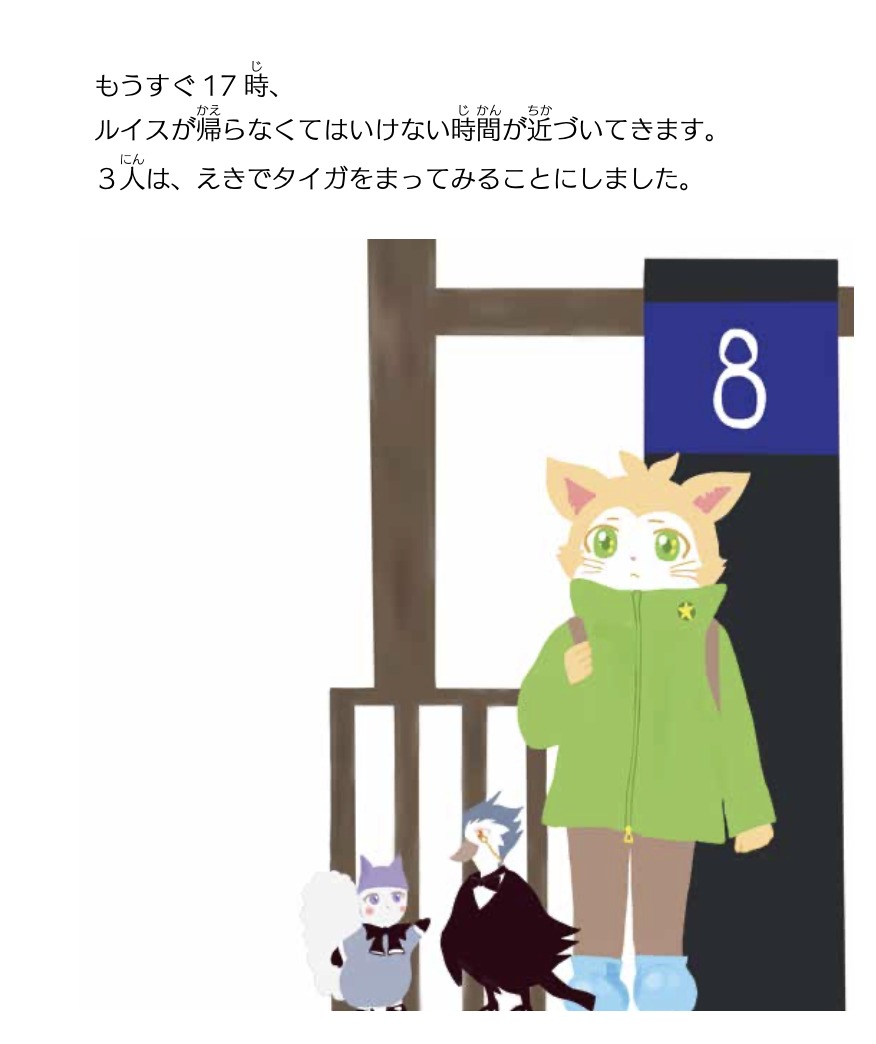 It was almost 5PM, which meant it was almost time for Louis to go back.
The three decided to wait for Taiga at the station. 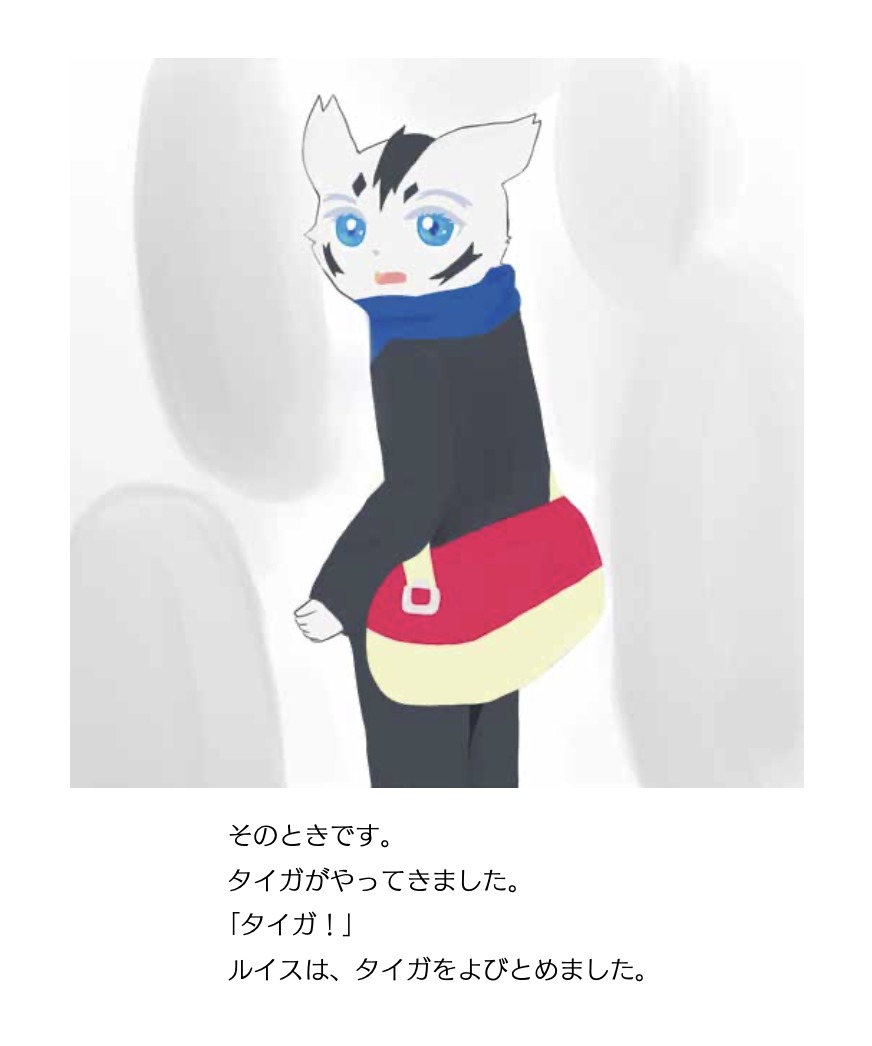 And that’s when Taiga came. “Taiga!”
Louis stopped him. 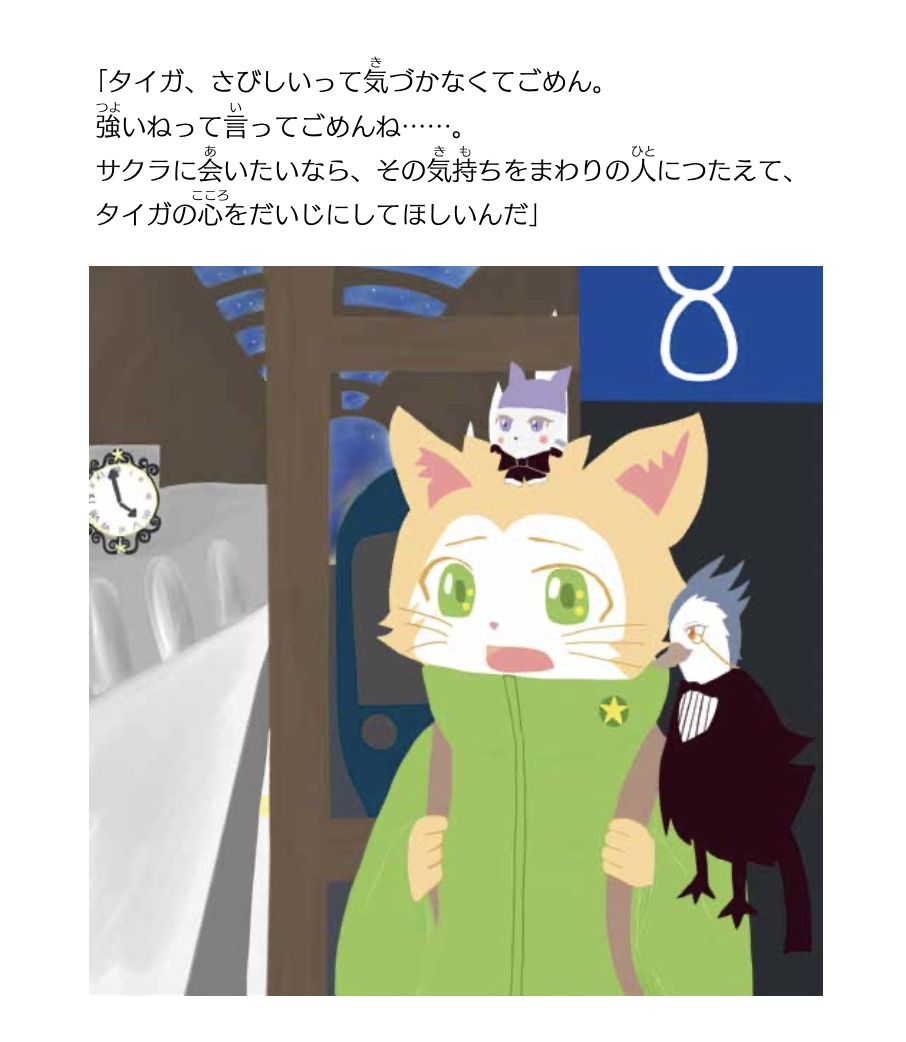 “I’m sorry I didn’t realize that you felt lonely.
I’m sorry I said you were strong.
If you want to see Sakura, you should let the people close to you know how you feel.
You don’t have to hide your sad feelings.” 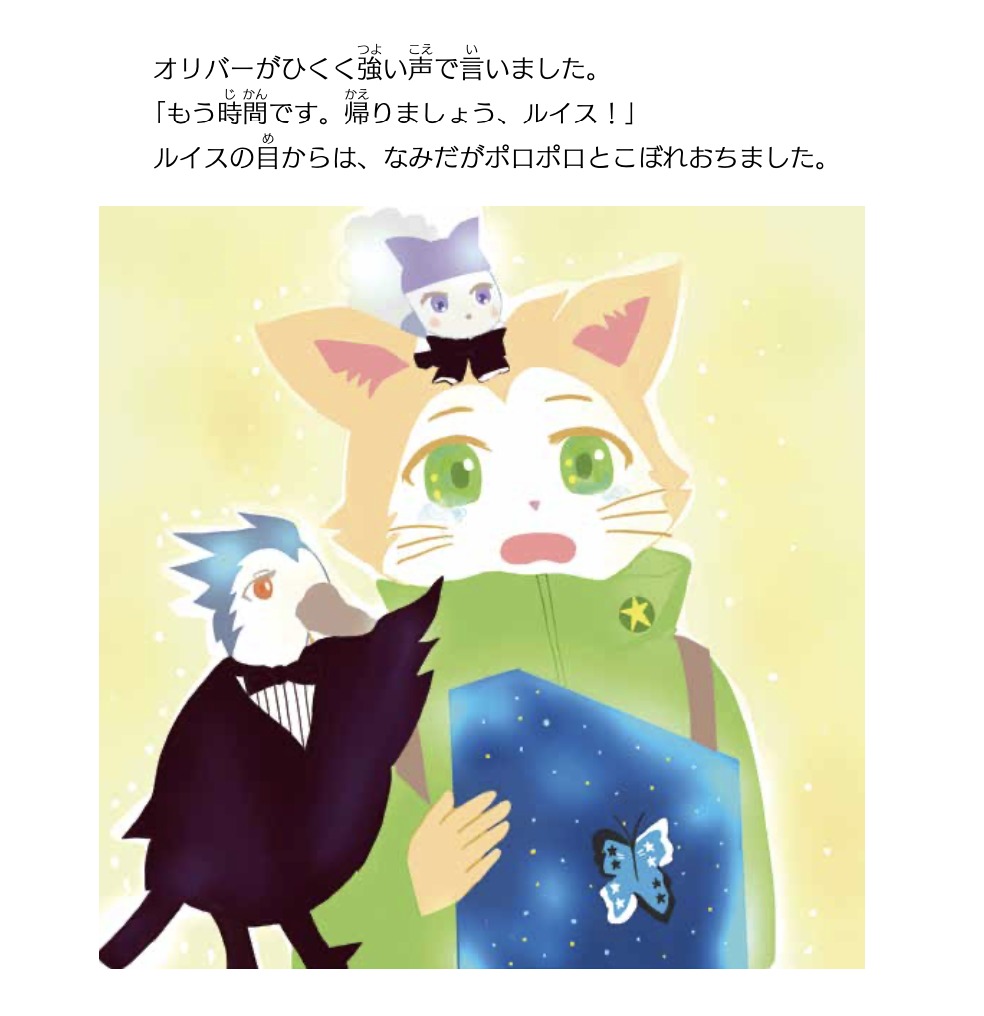 “It is time. We should go back, Louis!” Oliver said in a soft but firm tone. Tears trickled down Louis’ cheek.

He opened the number 24 and, in the last moment before he went back, he saw Taiga. 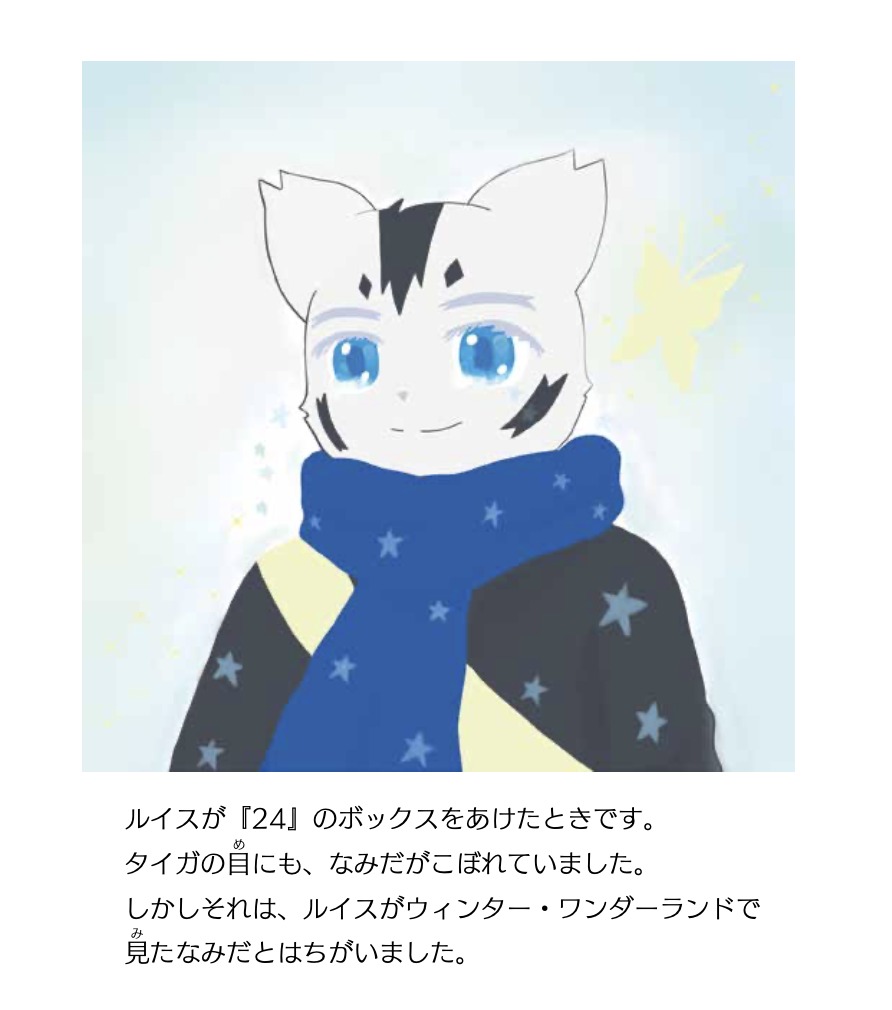 Tears were streaming from Taiga’s eyes,
but those tears were different from the ones Louis saw at Winter Wonderland. 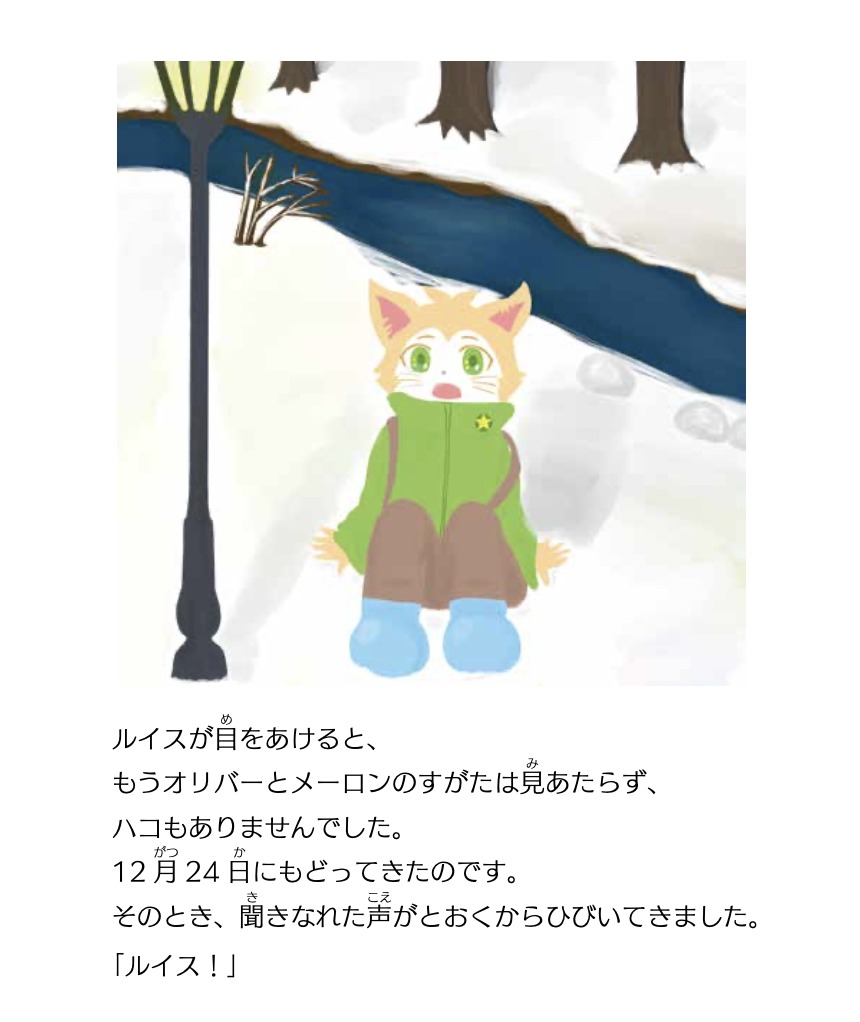 When Louis opened his eyes, he couldn’t find Oliver or Melon or the box.
He heard a familiar voice. 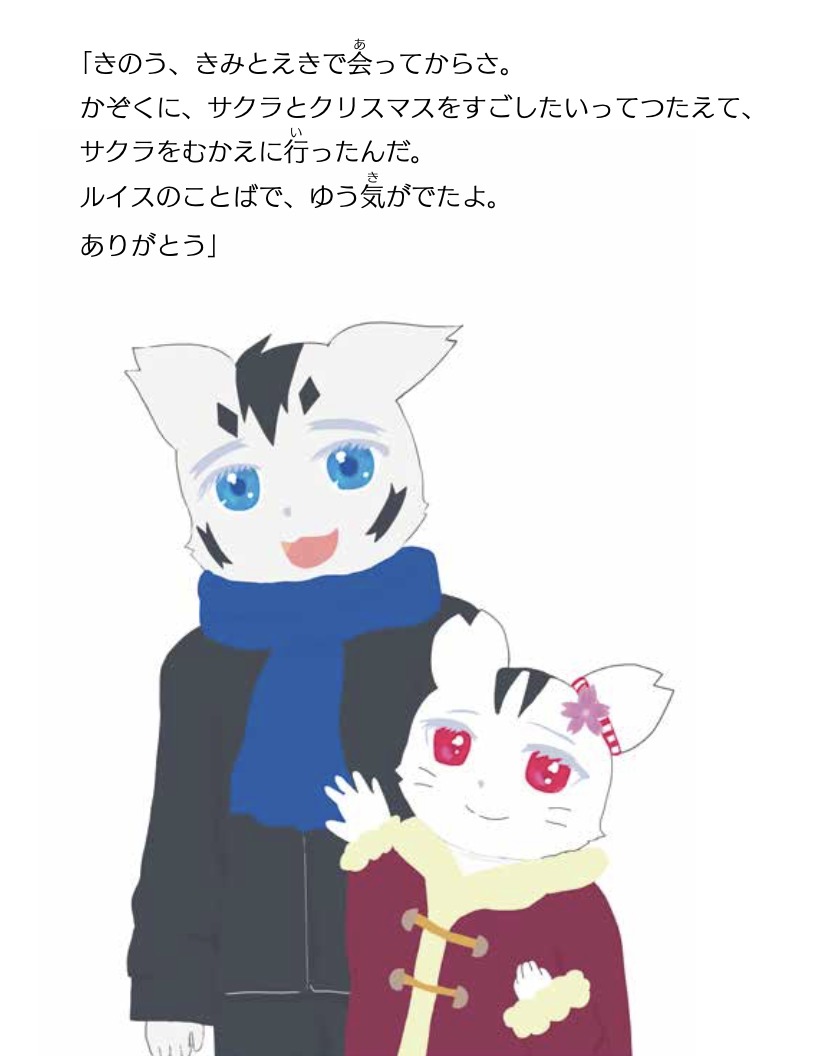 “After seeing you at the station yesterday,
I told my family that I wanted to spend Christmas with Sakura and pick her up.
Your words gave me courage,
thank you.” 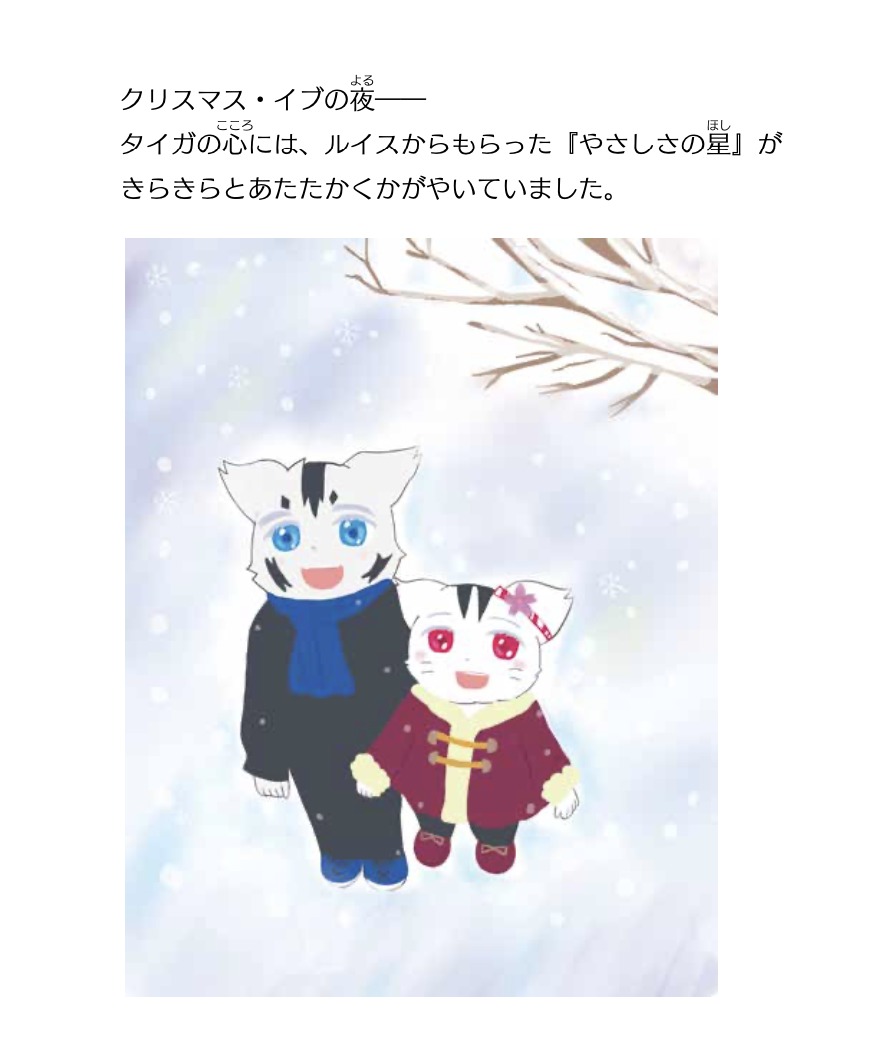 On the night of Christmas Eve —
In Taiga’s heart, the star of kindness sparkled warmly. 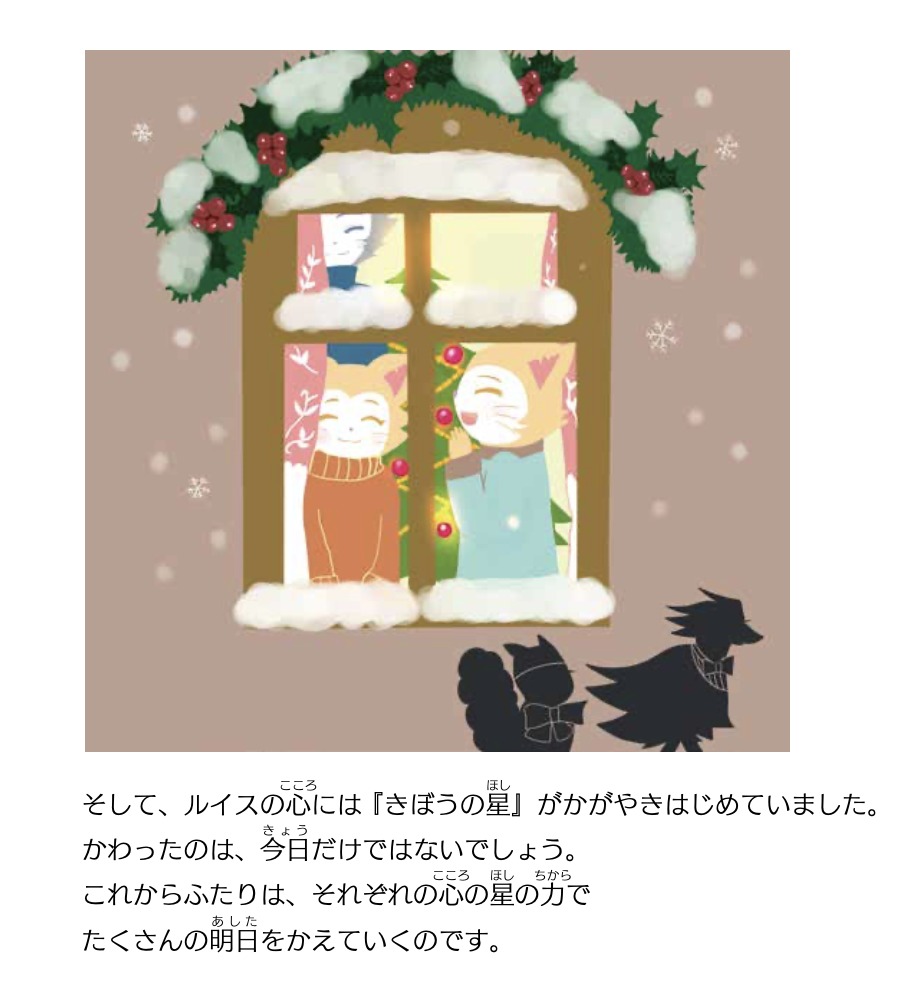 In Louis’s heart, the star of hope started to twinkle. It wasn’t only today that they had changed, it was their futures.

And their tomorrows were much brighter now, having been lit up by the stars in their hearts.